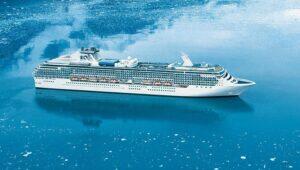 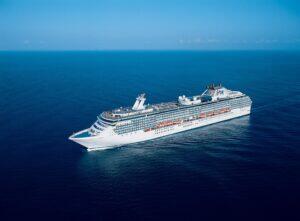 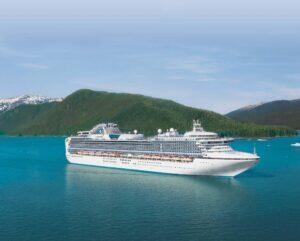 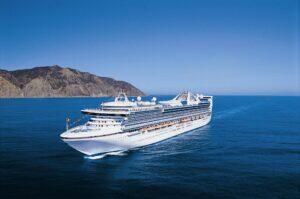 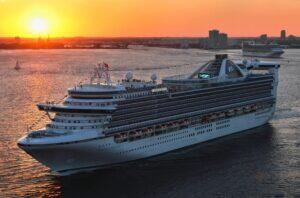 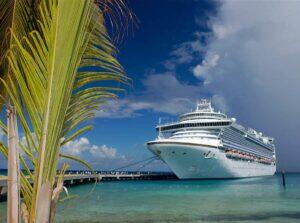 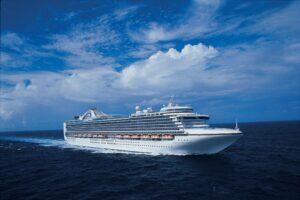 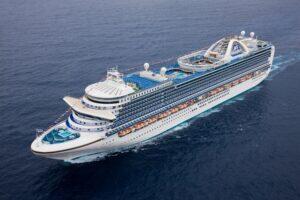 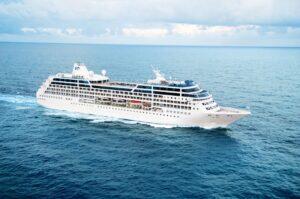 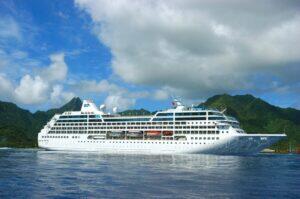 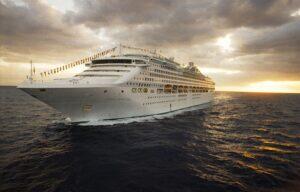 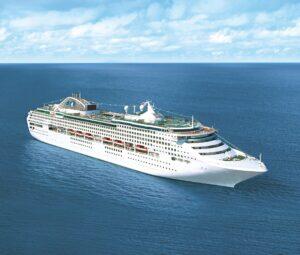 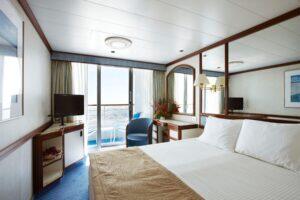 Only the observation lounge/nightclub has been significantly refurbished since Tahitian Princess left Renaissance, though the characteristic comfortably aristocratic feeling has largely retained.

The area most reminiscent of a classic ship is the purser’s lounge area on Deck 4, featuring a grand staircase reminiscent of the Titanic. The lounges and bars are all comfortably inviting, with the Club Bar attracting most guests. There’s a Polynesian nightclub (which old Renaissance passengers will be amused to recognize as the sports bar, lightly remodeled), an Internet cafe, and a remarkably popular self-service laundry with four washers and dryers, two ironing boards, and free soap. The library has a faux fireplace, overstuffed couches, and walls lined with cherry-finished bookshelves, even though it could use a few more books published after the ship changed hands.

The Internet room, do note, has only six workstations. And if you’re accustomed to broadband at home, you’ll find the connection maddeningly slow. Moreover, getting help from the staff isn’t likely.

The various dining areas offer a wide variety, the breakfast and lunch buffets being especially varied. The alternative restaurants are terrific, but there’s a surcharge.

The staff, from all over the globe, is helpful and attentive.

The 358-seat Cabaret Lounge presents shows performed by a team of singer/dancers, as well as performances by comedians and magicians. On some itineraries, there’s a local folklore show. On cruises to French Polynesia cruises, such staple activities as bingo, bridge, and dance lessons are sharply curtailed because most of their potential participants are ashore. While you’re docked in Raiatea, don’t miss the musical extravaganza presented by several generations of locals.

The small casino has 30 slot machines and tables for blackjack and roulette. The Nightclub disco is a firm favorite of any insomniacs aboard.

Of 308 outside cabins, 73 percent have a balcony. There are 26 inside cabins, four of them wheelchair-accessible (if available, these are some of the most spacious “bang for your buck” cabins, though they are inside and dark, they are incredibly roomy. Pleasantly furnished in Wedgwood blue fabrics and carpeting, with yellow drapes over the floor-to-ceiling windows, the staterooms are pleasant enough, but the suites are worth the extra money for the extra breathing room they provide, especially in the bathrooms. Ample closet/drawer space, a (woefully substandard) hair dryer, a personal safe, and color TV on which you can watch CNN, MSNBC, and Princess’ own onboard news channels are all standard amenities. The smaller cabins have a bathroom with shower, while suites and owner’s suites have bathtubs too.

In private veranda cabins, don’t be shocked to find Astroturf where you might reasonably have expected teak. Inside cabins are the smallest at 158 sq. feet. Outside staterooms, from 146 to 206 sq. feet, have either portholes or big picture windows. Outside cabins with private balcony are 216 sq. feet, including a 45 sq. ft. balcony. Mini-suites with private balconies are a roomy 322 sq. feet, including a 17′ x 4.5′ balcony with two chairs and a table. Veteran voyagers, especially those accustomed to other lines’ suites, are likely to find the bathrooms almost satirically tiny, virtually without counter space.

Two forward suites facing the front of the ship are view-less. The Category A Owner’s Suites, ranging from 786 to 962 sq. feet, are all located either completely forward or aft. Forward owner’s suites numbers 6002, 6003, 7004, 7005) have direct sight lines of the rope deck on the front of the vessel. And if you’re in a forward cabin on Deck 6, you’d better hope you like the orchestra that performs (and rehearses!) in the Cabaret Lounge, as you’re right above it, and will be hearing a lot of them!

What we like most about the ship’s balconies is that they’re wrought iron, and insert no glass between you and the view.

The faintly exotic Lotus Spa, Salon, and Gym, operated, inevitably, by Steiner of London, offers a program of fitness and wellness. The fitness center, whose wall of windows makes it seem bigger than it really is, is well-equipped, with treadmills, bikes, and several weight machines. There are two steam rooms (for those who aren’t hot enough in this part of the world to begin with!) and a walking/jogging track that circles the top of the ship. Instead of a 360-degree promenade, there are, on Deck 5, deck areas both port and starboard.

There’s virtually never a wait for either of the two poolside Jacuzzi whirlpools, hardly surprising given how sweltering it can get in the South Pacific.

Considering that your destination is the South Pacific, you’ll want to pack a hat, sandals, sun block and a bathing suit. Grass skirts and loud Hawaiian shirts are at your own discretion. Aboard cruises of 10 to 14 nights, expect two formal nights and five to 12 “smart casual” evenings. Resort casual is the rule by day.

As is the tradition on all Princess ships (and bless them for it), there is food available 24 hours a day. On this small ship originally designed to have one main dining room, a buffet and two specialty restaurants, someone went to extraordinary trouble to make dining about as confusing as possible. That doesn’t mean the food isn’t good, though. The very traditional Club Dining Room offers open seating for breakfast and lunch, and two seatings for dinner, when passengers are assigned tables and tablemates, at 6 p.m. and 8:15 p.m. There are only a few tables for two.

One of the alternative restaurants has been kept as such, but changes its identity every other night, beginning as the traditional Princess favorite, Sabatini’s Trattoria, for Italian multi-course dining, and then on the next night becoming the Sterling Steakhouse, the carnivore’s delight. Both levy a fee, $15 for Sabatini’s and $8 for the steakhouse. This venue stays open until 10 p.m, closes for an hour and then reopens as a bistro, and doesn’t close until 4 a.m. The very casual Panorama Buffet serves up breakfast and lunch, including a pizzeria, BBQ, and an ice cream bar, and becomes the Panorama Pizzeria from 5:30 p.m. to 12:30 a.m., but serving nothing only pizza (which is to say, no salads or antipasti).

Room service is available, of course, around-the-clock. And a highly recommended late-night eating special event is the poolside Polynesian buffet.

Regardless of which dining plan you choose, you’ll be charged $10 per person per day for dining and stateroom personnel, even if you’re a child. Consult the purser, at the reception desk, about raising or lowering this amount. All beverage tabs automatically include 15-percent gratuity. Tip the spa, casino, and other staff as you deem fit.

Originally built in 1999 as the third of a series of eight ships for Renaissance Cruises, which ceased operations in 2001, the former R3 was acquired by Princess Cruises and launched as Pacific Princess in 2002. After refurbishment, the ship retained its original midsize ambience and boutique-hotel style.

At 30,277 tons, this ship appears positively tiny beside its megaship fleetmates. In reality, it is a medium-size ship that entered service for the now-defunct Renaissance Cruises. With its entry into the Princess lineup, real choice is available to Princess passengers—a true alternative for those who prefer the clubby atmosphere of a smaller boutique-style ship but with big-ship features galore.

Princess Cruises may be best known for introducing cruise travel to millions of viewers, when its flagship became the setting for The Love Boat television series in 1977. Since that heady time of small-screen stardom, the Princess fleet has grown both in the number and size of ships. Although most are large in scale, Princess vessels manage to create the illusion of intimacy through the use of color and decor in understated yet lovely public rooms graced by multimillion-dollar art collections.

Princess has also become more flexible; Personal Choice Cruising offers alternatives for open seating dining (when you wish and with whom you please) and entertainment options as diverse as those found in resorts ashore.

Lovely chapels or the wide-open decks are romantic settings for weddings at sea with the captain officiating.

Designed for longer cruises, all staterooms have ample closet and storage space, although bathrooms in lower-priced categories are somewhat tight. Dark-wood cabinetry adds warmth to the pastel decor. In keeping with the rest of the fleet, 73% of all outside cabins and suites have a balcony, and interiors are similar in size to those you’ll find on other Princess ships.

Amenities in standard cabins are a bit Spartan compared to other Princess ships, yet all have at least a small seating area. Bath toiletries, a hair dryer, a safe, and robes for use during the cruise are all included, but you must move up to a minisuite or suite to have a real bathtub.

The only disappointment in this ship is the lack of a Personal Choice dining room. Although open seating breakfast and lunch are served in the main dining room, the only dinner option is in one of two assigned seatings. Sabatini’s Italian Trattoria and Sterling Steakhouse specialty restaurants are reservations-required and extra-charge dinner alternatives. With a few breaks in service, Lido buffets on all ships are almost always open. There’s a pizzeria window in the buffet area and a separate poolside grill for casual lunch and snacks. Ultimate Balcony Dining is available, as is afternoon tea, and 24-hour room service.

Nighttime shows in the main lounge, which is on the small side, tend to be cabaret style; guest performers often include comedians and magicians. Live bands play a wide range of musical styles for dancing and listening in the lounges. The entertainment staff leads lively evenings of fun with passenger participation.

Spa treatments offered by Steiner Leisure include a variety of massages, body wraps, and facials, including some designed especially for men. All the way forward is a relaxing outdoor spa-inspired setting with loungers and a therapy pool, for which there is a fee for everyone except those in suites. Complimentary to all are steam rooms in men’s and women’s changing facilities.