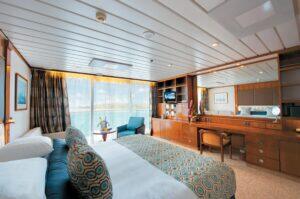 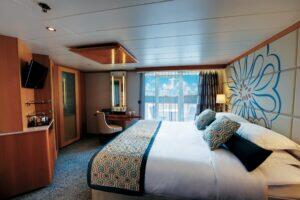 Last year, Paul Gauguin Cruises, operator of the Paul Gauguin, widely hailed as the most luxurious ship in French Polynesia, acquired m/v Tere Moana from French Cruise Line Compagnie du Ponant, where she had sailed as Le Levant since her 1998 debut. This small, 3,504 grt vessel is an intimate, all-inclusive cruise experience with a guest capacity of 90. She was launched by Paul Gauguin Cruises as Tere Moana in December 2012 and sails the Caribbean in Winter and Europe in the Summer.

Tere Moana got off to a rocky start (both literally and figuratively) when guests aboard early sailings complained of faulty stabilizers and inferior cuisine. Cruisemates.com has found that while Tere Moana remains (as of this May 2013 writing) a work in progress, the commitment and excellence of her on board management and crew has led to significant enhancements that, if continued, will likely position Tere Moana as a favorite among fans of small ships.

Tere Moana isn’t for those seeking round-the-clock activities, lavish production shows and multiple dining venues. In fact, the ship’s Salon is the social heart of this tiny vessel, its talented and versatile keyboardist/singer its only nod to traditional entertainment. Instead, this is the ship for those seeking an uncrowded cruise experience, the luxury of all-inclusive dining, beverages and gratuities and a destination-focused sailing. With a capacity of 90 guests (and significantly fewer in these early days sailing as Tere Moana), fast friendships are forged and lively conversation and laughter fill the Salon each evening as groups of new friends share their experiences ashore.

Blonde woods, ivory metallic leathers and upholstered cushions in blues, beiges, browns and white adorn Tere Moana’s Salon, while blues and beiges comprise the color scheme of La Veranda as well. Curiously, Tere Moana, sailing in the Caribbean and Europe for the foreseeable future, sports a great deal of the French Polynesia theme of its bigger sister, The Paul Gauguin. From backlit Polynesian art prints in the Salon to framed posters of Marlon Brando in his Tahitian paradise, the artwork often seems out of character when one looks out at the mountains of Montenegro or the gondolas of Venice. Even the on board shop is filled with Tahitian black pearl jewelry.

The Salon is the social heart of this tiny vessel, where the talented and versatile keyboardist/singer is the only entertainment.

This is the ship for those seeking an uncrowded cruise experience, the luxury of all-inclusive dining, beverages and gratuities and a destination-focused sailing. With a capacity of 90 guests (and significantly fewer in these early days sailing as Tere Moana), fast friendships are forged and lively conversation and laughter fill the Salon each evening as groups of new friends share their experiences ashore.

While breakfast remains unchanged throughout a sailing with eggs, cereals, breakfast meats and breads the main offerings, lunch often reflects an international theme, usually featuring local dishes of the day’s port, i.e., Greek, Italian, Croatian, American, etc. Meal times are brief, with breakfast typically ending at 9:00 a.m. or as early as 8:30 and lunch typically served from noon until 1:30 p.m.

Acquired from French Cruise Line Compagnie du Ponant, where she had sailed as Le Levant since 1998.

The indoor/outdoor La Veranda offers a breakfast and lunch buffet each day. On most nights, dinner is served in L’etoile at a single seating. Comfortable chairs and blonde wood walls adorned with framed prints lend a homeyness to this single-level dining venue which could be improved with lower lighting. The restaurant serves a menu that includes appetizers, salads, soups, main courses, cheese and desserts, all complimented by the evening’s wines.

On one evening per cruise, guests abandon the restaurant in favor of a very special evening at La Veranda. Perhaps Tere Moana’s signature event, this indoor/outdoor dining experience kicks off with a selection of appetizers, plated and served to each guest rather than in the more typical family style. While guests enjoy the shrimp, bruschetta, prosciutto-wrapped cheeses and other delicacies that comprise this extravagant beginning, Tere Moana’s excellent crew is igniting the grill for a decadent lobster tail and steak bake, supplemented by a pasta station that includes not just alfredo and marinara sauces, but a towering pile of the freshest clams swimming in a heady broth of white wine and garlic. And what’s for dessert? Cherries Jubilee.

High levels of unobtrusive service – but expect to be pretty much left alone to read, watch the television, etc.

Tere Moana attracts mostly couples, aged 45 and higher. While guests tend to be sophisticated and well travelled, the experience is not one with a strict focus on education.

During the winter season, Tere Moana sails on week-long round-trip cruises from St. Martin to destinations in the British Virgin Islands, French West Indies, and French Antilles as well as longer voyages of up to 14 nights that range as far as Aruba, Curacao, Colombia, Costa Rica, and Panama. After crossing the Atlantic, she roams the Mediterranean in summer months, offering seven-night itineraries, either round trip or one-way from Barcelona, Lisbon, Civitavecchia (Rome), Venice, Athens, or Istanbul.

More megayacht than cruise ship, Tere Moana’s public spaces are small but include a high-end spa, a small fitness center equipped with the latest cardio and weightlifting equipment, and water sports marina from where kayaking and paddle boarding are available in select ports. Although there are two restaurants, there is only one lounge for daytime lectures and nightly entertainment. You will find a generous library space on board but no casino. Deck space, with its pool, bar, chaise longues, and Balinese sun beds, is adequate for the small passenger complement.

With one ship built specifically to sail the waters of Tahiti, French Polynesia, and the South Pacific and synonymous with luxury and exotic destinations, Paul Gauguin Cruises remains a top choice for discerning travelers and honeymooners. The MS Paul Gauguin has been in service since 1998 and lays claim to being the only luxury ship in history to have offered a single-destination focus and high level of expertise on a year-round basis for such an extended period of time. The line now has a second ship that will sail in Europe and the Caribbean.

The well-loved ship sailed for over a dozen years under the flag of Radisson (later Regent) Seven Seas Cruises until the ship was sold. Paul Gauguin Cruises began in 2010 with the single ship when the Paul Gauguin was acquired by Pacific Beachcomber SC, the largest luxury hotel and cruise operator in French Polynesia. In order to offer similarly luxurious cruises in other regions—Europe in summer months and the Caribbean during the winter season—the line introduced a second vessel, MVTere Moana in 2012.

Intimate and luxurious, Paul Gauguin ships offer a cruise experience tailored to the regions in which they sail. On board you can enjoy a dip in the swimming pool or simply relax poolside in a deck chair, with a good book and a beverage from the nearby bar. You won’t want to miss the Fare Tahiti art exhibit in front of La Veranda restaurant on Paul Gauguin, although you may want to bring your own reading material as the library has only a few shelves of mostly English-language books. Passengers aboard Tere Moana fare a bit better with a larger library. A relaxed atmosphere prevails throughout both vessels, but the cruise line definitely has a split personality, with voyages on MS Paul Gauguin limited to the South Pacific and those of MV Tere Moana as varied as the Caribbean and Europe.

Pros
Cons
Ship’s small size means you’ll get to know other passengers
Dining is elegant, but the ambience is casual
The water sports marina offers complimentary use of kayaks and paddleboards
With a limited number of stateroom balconies, you’ll have to plan ahead to get one
There are no facilities for children
The ship is not suitable for passengers requiring accessible accommodations

All accommodations are luxuriously appointed with tasteful furnishings and decor in soothing tropical colors. Only eight staterooms have balconies, but all have an ocean view and contain amenities such as bathrobes for use during the cruise, slippers, hair dryer, flat-screen TV, CD/DVD player, safe, and a refrigerator stocked with soft drinks, beer, and bottled water. Queen-size beds dressed with fine linens and feather-down duvets are convertible to twin-bed configurations.

Bathrooms are stocked with toiletries including shampoo, conditioner, moisturizer, and bath gel.

None of the accommodations is designed for wheelchair accessibility.

Open seating dinners in the formal restaurant L’Etoile are French-inspired and regionally infused by the destinations on the ship’s itinerary, often featuring fresh ingredients from local markets. Open only for dinner, L’Etoile showcases culinary creations by Jean-Pierre Vigato, Chef of Apicius restaurant in Paris. For breakfast and lunch, you either order off the menu or make your selections from the extensive internationally themed buffet in La Veranda. Tea is also served in La Veranda, where seating is available indoors or on the adjacent deck. In the evening, La Veranda is transformed into an elegant, reservation-only dining venue featuring gourmet cuisine for which there is no charge. Complimentary wines chosen to complement the menu are freely poured at lunch and dinner. Room service is available around the clock, and select items from the L’Etoile menu can be ordered during dinner hours.

With only one lounge and a pool bar, organized evening entertainment aboard Tere Moana is limited. Le Salon is well suited as a venue for cabaret-sized shows, either performed by the Paul Gauguin staff or a guest troupe from ashore. Live music is featured nightly for listening and dancing.

The luxurious Deep Nature Spa by Algotherm is noted for combining the art of gentle pampering with services that are uniquely tailored to each individual. A full menu of treatments includes facials utilizing an AlgoDerm machine, skin care therapies and exfoliation, massage, reflexology, aromatherapy, and body wraps. Unique treatments are the supreme “gold massage,” inspired by traditional Russian massage methods, and AlgoSilhouette contouring, toning, and firming techniques. Use of the steam room is complimentary.