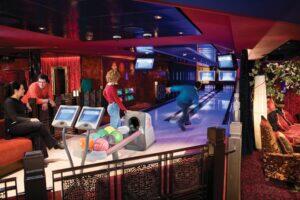 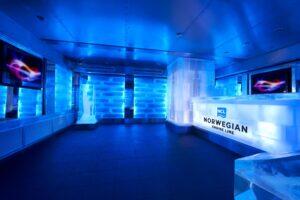 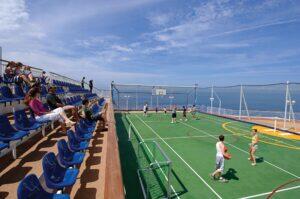 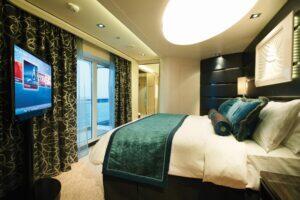 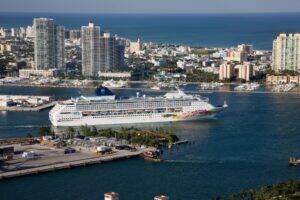 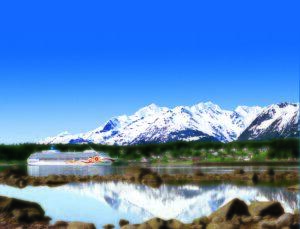 The intimacy found aboard smaller ships; traditional cruise dining and dress rules; not to be pestered to attend art auctions and buy, buy, buy at the daily sales in the shops.

There are two main dining rooms onboard Norwegian Dawn; Aqua with its traditional tablecloths and chairs, and Venetian which evokes the luxurious ocean liners of yesteryear with its hushed candlelit elegance, grand piano, staircase and gigantic Palladian windows.

NCL’s “Freestyle Cruising” allows passengers to choose when and with whom to dine. Beyond the traditional dining rooms, there’s Cagney’s Steakhouse, on Deck 7 behind the Grand Centrum, which charges $20 per-person and serves steaks and chops and whole lobsters in a 1930s-ish setting. In Le Bistro, NCL’s French restaurant (surcharge $15), appetizers include escargot in garlic butter, and a generous array of salads is offered. Order chocolate fondue — chunks of fresh fruit served in a pineapple “boat” with a pot of melted chocolate to dip it in – for dessert. The Thai/Japanese/Chinese Shogun ($12.50) serves gorgeous Asian-fusion dishes. The complex also includes a Teppanyaki room and sushi bar (a la carte pricing applies), and a Tatami Room where eight guests sit on the floor to dine.

The least impressive of Dawn’s dining areas, The Lido buffet, often has long lines. In the evenings, it’s converted into a fee-free Italian restaurant – La Trattoria.

NCL automatically adds a fixed service charge of $10 to the shipboard accounts of passengers over 13 to make service personnel feel appreciated; children between three and 12 are charged $5. Those under three get off scot-free.

The Stardust Theater, with excellent sight lines, presents elaborate, colorful and sometimes even exciting shows. Champagne Charlie’s and Galaxy of the Stars feature live music daily; there’s dancing in the latter. There’s music in Celebrity Disco at night as well, of course, and a D.J. spinning popular dance tunes in Maharini’s.

Popular on-board activities range from craft lessons (beaded geckos!) to learning a foreign language (Spanish and Tagalog, the language of the Philippines) to games, trivia contests, and bingo. The casino, Maharaja’s, offers a huge array of slots and table games. The art auctions are popular too.

There are six basic cabin types: insides, portholes, windows, balconies, junior suites and suites, all of which feature more assertive colors than the public areas. Indeed, the bedspreads are downright garish. Almost all of the rooms on this ship are interconnecting, making them ideal for friends or family groups. Double metal doors (as opposed to the single composite doors in most other ships) minimize sound seepage between adjoining rooms. But although they are virtually soundproof from adjacent cabins, cabins on Deck 11 can be particularly noisy, with scraping chairs from the Lido Deck midship and aft, or loud nighttime music from Galaxy of the Stars forward.

Outside cabins have a large picture window. Balcony staterooms have a full-wall sliding glass door, floor to ceiling, side to side, and an exterior balcony enclosure made of glass. Balconies are narrow (40 inches), but wide enough to accommodate a white plastic chair, a short lounger and a little table.

Because the ship was designed and built for the Asian market, chairs and handrails, the bathroom sink is lower, and the beds are all lower than most strapping native English speakers are accustomed to, and the furniture just slightly smaller. It isn’t that someone’s slipped something in your drink!

The gym is small but well equipped. The fitness center contains two small swim-against-the-current pools. The two sexes have separate changing rooms, relaxation rooms, and steam and sauna rooms. The women’s side is gorgeous and expansive, with a window-lined relaxation room along the port side. There are a couple of televisions and several comfy chairs and sofas. The Roman Spa, operated by Mandara (Steiner of London in disguise), offers treatments ranging from hot stone massages to body-cleansing wraps, albeit in tiny treatment rooms. The mid-range for massages seemed to be around $100, but specials are regularly mentioned in the Freestyle Daily, especially on port days.

The outside promenade on Deck 7 circles the ship and is the ideal place for a walking circuit; the Sports Deck has a running track (pleasantly unobtrusive, as it is set off from sunning areas by a wall; six circuits to a mile), basketball and volleyball courts, and a golf cage. Ping-Pong tables are located at the aft of Deck 11. The ship’s Sports at Sea program offers logo items to those who complete their programs.

The one swimming pool on the Lido Deck, big enough for early-morning lap swims, is nicely laid out and attractive, but can feel a bit oversubscribed in mid-afternoon.

This ship is a dream come true for juvenile passengers, with approximately one-fifth of Deck 10 allocated to them. The kids’ center itself is divided into several age-appropriate rooms. Then there is the video arcade to keep older children and teens distracted for hours, and a teen disco. The little folks’ area features climbing tubes and tunnels, a ball crawl, and lots of soft toys, all in bright primary colors. There’s an outdoor activity area and a crafts section. In Buccaneer’s Wet and Wild there’s an onboard water park, with a pool surrounded with caves and a mountain, two small slides that require entry through a tunnel, pirate’s cannons that shoot water, and even a children’s hot tub. An amphitheater has been installed between Decks 10 and 11 at the aft end so parents can sit and watch their kids play while getting hammered on drinks from the Raffles bar. There is no charge for the center, which welcomes children from age 2 to 16.

The designated dress code is “resort casual,” which for ladies means sundresses, blouses, sweaters, slacks and skirts, and for their male companions shirts with collars, such as polo shirts, and khakis or trousers. Dressing up for formal nights is optional, as informal attire is permitted in several areas, but jeans, shorts, T-shirts, swimsuits and beachwear are forbidden in the restaurants after 5:30 p.m. On the one formal night per one-week cruise, most men say to hell with it and put on a dark suit instead of a tux.

NCL has become synonymous with innovation in the cruise industry, and this is one of the newer NCL ships that proves it. As the the third ship purposely built to offer the “Free-style” concept of dining there are ten different restaurants onboard. Obviously, this is not a cookie-cutter cruise ship. There is a variety of accommodations, with many interconnecting cabins ideal for family cruising. Sixty-five percent of outside cabins have private balconies, while several inside facing cabins overlook the Grand Centrum. Open-seating dining is offered in the two main restaurants and the French, Japanese and Chinese alternative choices. Don’t forget the Garden Cafe Lido Buffet or the 24-hour Blue Lagoon Cafe. There’s a wrap-around promenade, expansive kids’ and teen facilities, a two-deck 1,000-seat show lounge, disco, cinema, casino, Roman Spa & Fitness Center, and observation lounge. The sports deck has a jogging track, golf driving range, and a court that basketball, volleyball and tennis enthusiasts alike can use.

While there is just enough neon and gilt to remind you are on a cruise ship, each room on the ship truly has its own flavor (appropriate for a ship with 10 restaurants).

The six-deck-high central atrium, the Grand Centrum, is the ship’s social focal point. A black marble floor leads to a grand and elegant staircase, which ascends to the shops above, and to Dazzle’s Nightclub lounge, which features music in the evenings. There are upholstered chairs and divans for conversation on the starboard side of the Grand Centrum, and, on the port side, the Java Cafe, a small lounge serving coffee, cakes, cookies and other bar drinks. Behind the staircase is a black marble fountain that can be admired from the atrium’s three glass-enclosed elevators as they rise to higher floors.

Spinnaker Lounge, located on Deck 12 forward, is Spirit’s vast, bright observation lounge. Floor-to-ceiling glass surrounds it on three sides. A small bandstand and dance floor are in the middle, a large bar near the entrance; a circular stairway descends to a bridge viewing area, and a computerized navigational chart on a raised platform allows you to ensure that you’re heading in the right direction.

T-Rex Childcare Center and the kids’ pool areas are as good as you’ll find on any cruise ship this size. A virtual shipboard amusement park, it features tunnels and tubes, a pool complex with slides and fountains and pirate muskets blasting water, and the best game arcade on the seven seas.

Here is a list of all the alternative dining venues onboard:

Le Bistro French Restaurant – Deck 6; seats 90. The walls are adorned with paintings and the menu is filled with modern classical and contemporary French gourmet fare.

Bamboo – A Taste of Asia – Deck 7; seats 114. Pan Asian cuisine with Japanese, Thai and Chinese selections. With a sushi and sashimi bar, a teppanyaki room and many authentic Asian dishes.

Blue Lagoon – Deck 7; seats 92. Blue Lagoon 24-Hour Food Court. Whether you’re hankering for a burger, midnight snack or a fast-wok dish, you can enjoy it all in a family friendly atmosphere day or night.

Teppanyaki – Deck 7; Located in Bamboo – A Taste of Asia, you are invited to sit at tables of 10 for a truly Asian dining experience, where preparing food has never been more entertaining, or authentic.

Service is friendly but may tend to be a little too casual at times. Dinner service can be inconsistent.

First in the two-ship Dawn-class built for Norwegian Cruise Line, Norwegian Dawn was christened in 2001. The ship introduced many of Norwegian’s groundbreaking elements, and even today, Norwegian Dawn still features some of the largest accommodations at sea. In 2011, a refurbishment resulted in the addition of 50 cabins; the Spinnaker Lounge was relocated and reconstructed; and some other public spaces were also moved.

Purpose-built for Norwegian’s Freestyle cruising concept, Norwegian Dawn and Norwegian Star each have more than a dozen dining options, a variety of entertainment selections, and expansive facilities for children and teens.

These ships introduced Norwegian’s superdeluxe Garden Villa accommodations, English pubs, and 24-hour dining in the Blue Lagoon Restaurant. Interior spaces are bright and cheerful, especially the atrium area adjacent to the outdoor promenade, which is flooded with sunlight through expansive windows. A second smaller garden atrium with a prominent waterfall leads the way to the spa lobby. Near the children’s splash pool is a hot tub for parents’ enjoyment.

Norwegian Cruise Line set sail in 1966 with an entirely new concept—regularly scheduled Caribbean cruises from the then-obscure port of Miami. Good food and friendly service combined with value fares established the line as a winner for active adults and families. Innovative and forward-looking, Norwegian has been a cruise-industry leader for decades, and its fleet is as much at home worldwide as in the Caribbean. Several of the line’s ships cruise Alaska’s Inside Passage, including one of its newest, Norwegian Bliss.

Noted for top-quality entertainment, Norwegian combines action and high-energy activities as well as a variety of dining options in a casual, free-flowing atmosphere. Norwegian’s freestyle cruising signaled an end to rigid dining schedules and dress codes. Norwegian ships now offer a host of flexible dining options that allow passengers to eat in the main dining rooms or any of a number of à la carte and specialty restaurants at any time and with whom they please. The ships’ accommodations include some of the largest suites at sea, studio cabins for solo travelers, and a private ship-within-a-ship complex called The Haven, a more luxurious area with personalized service.

From a distance, most cruise ships look so similar that it’s often difficult to tell them apart, but Norwegian’s largest, modern ships stand out with their distinctive use of hull art. Each new ship is distinguished by murals extending from bow to midship.