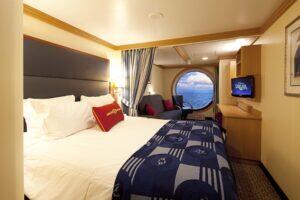 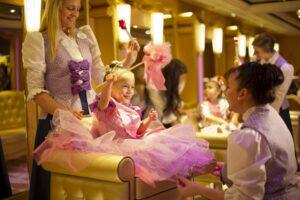 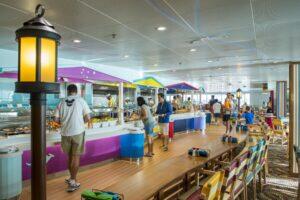 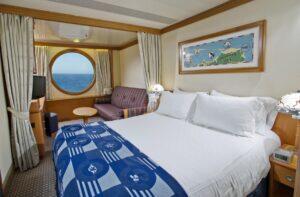 With the launch of Disney Cruise Line in 1998, families were offered yet another reason to take a cruise. The magic of a Walt Disney resort vacation plus the romance of a sea voyage are a tempting combination, especially for adults who discovered Disney movies and the Mickey Mouse Club as children. Mixed with traditional shipboard activities, who can resist scheduled opportunities for the young and young-at-heart to interact with their favorite Disney characters?Read More

Although Disney Cruise Line voyages stuck to tried-and-true Bahamas and Caribbean itineraries in their formative years, and sailed exclusively from Port Canaveral, Florida, where a terminal was designed especially for Disney ships, the line has branched out to other regions, including Alaska and Europe.

1
Character Interaction.Disney characters make frequent appearances.
2
Classic Ships.Classic ship design (Disney’s are the first passenger ships since the 1950s to have two funnels).
3
Entertainment.Some of the best entertainment at sea for guests of all ages.
4
Fireworks.Among the few ships that are allowed to host fireworks at sea.
5
Kid Stuff.Excellent facilities for children and teens.

Choose this Line If
Don’t Choose this Line If
You want to cruise with the entire family—Mom, Dad, the kids, and grandparents.
You enjoy having kids around. (There are adults-only areas to retreat to when the fun wears off.)
Your family enjoys Disney’s theme parks and can’t get enough wholesome entertainment.
You want to spend a lot of quality time bonding with your kids. Your kids may not want to leave the fun activities.
You want to dine in peace and quiet. The dining rooms and buffet can be boisterous.
You want to gamble. There are no casinos, so you’ll have to settle for bingo.

What to Expect on Board

This is Disney, and the fare in each ship’s casual restaurants is all-American for the most part. A third restaurant is a bit fancier, with French-inspired dishes on the menus. Naturally, all have children’s menus with an array of favorite sandwiches and entrées. Vegetarian and healthy selections are also available in all restaurants. A bonus is complimentary soft drinks, lemonade, and iced tea throughout the sailing. A beverage station in the buffet area is always open; however, there is a charge for soft drinks ordered from the bars and room service.

Parents are actively involved in the audience with their children at production shows, movies, live character meetings, deck parties, and dancing in the family nightclub. Teens have a supervised, no-adults-allowed club space in the forward fake funnel, where they gather for activities and parties. For adults, there are traditional no-kids-allowed bars and lounges with live music, dancing, theme parties, and late-night comedy, as well as daytime wine-tasting sessions, game shows, culinary arts and home entertaining demonstrations, and behind-the-scenes lectures on animation and filmmaking. This is Disney, so there are no casinos.

A giant LED screen is affixed to the forward funnels of both the original ships and their newer fleetmates. Passengers can watch movies and special broadcasts while lounging in the family pool area.

Three swimming pool areas are designated for different groups: children (Mickey’s Pool, which has a waterslide and requires a parent to be present); families (Goofy Pool); and adults (Quiet Cove).

Young children who aren’t potty trained can’t swim in the pools but are invited to splash about in the fountain play area near Mickey’s Pool. Be sure to bring their swim diapers.

The salon and spa feature a complete menu of hair- and nail-care services as well as facials and massages. The Tropical Rainforest is a soothing coed thermal suite with heated tile lounges. It’s complimentary for the day if you book a spa treatment or available on a daily or cruise-long basis for a fee. SpaVillas are indoor–outdoor treatment suites that feature a veranda with a hot tub and an open-air shower. In addition to a nicely equipped fitness center and aerobics studio are a jogging track and basketball court.

There are hidden Mickeys all over the ships, just as in the theme parks.
Consider buying pins and autograph books at a Disney store before your cruise.
You can reserve many services and make dinner reservations prior to sailing.
Roomier than average standard cabins can easily handle four occupants.
Alcohol may be brought onboard but must be hand-carried on embarkation by an adult, age 21 or older, and cannot be consumed in lounges and other public areas.

Disney Cruises appeal to kids of all ages—the young and not so young, singles, couples, and families. Multigeneration family groups are the core audience for these ships, and the facilities are ideal for family gatherings. What you might not expect are the numerous newlywed couples celebrating their honeymoons onboard.

One-week cruises schedule a semiformal evening and a formal night, during which men are encouraged to wear suits, but sport coats and ties are acceptable for both. Resort casual is the evening dress code for dinner in the more laid-back dining rooms. A sport coat is appropriate for the restaurants designated as fancier, as well as the adults-only specialty restaurants, where a jacket is required at Remy and optional for Palo.

As expected, Disney ships have extensive programs for children and teens, including shore excursions designed for families to enjoy together. Parents are issued a pager for peace of mind while their children are participating in onboard activities and to alert them when their offspring need them. Complimentary age-appropriate activities are scheduled from 9 am to midnight in the Oceaneer Club and Oceaneer Lab for ages 3 to 12. While some activities are recommended for certain age groups, participation is based on the child’s interest level and maturity. Activities include arts projects, contests, computer games, pool parties, interactive lab stations, and opportunities for individual and group play. The emphasis is on fun over education, but subtle educational themes are certainly there. Coffeehouse-style tween (ages 11–14) and teen (ages 14–17) clubs offer music, a dance floor, big-screen TV, and Internet café for the younger set. Scheduled activities include challenging games, photography lessons, sporting contests, beach events, and parties, but they are also great places to just hang out with new friends in an adult-free zone.

An hourly fee is charged for childcare in Flounder’s Reef Nursery, which is open during select hours for infants as young as three months through three years. Supply your own diapers, and nursery attendants will change them. Private, in-cabin babysitting is not available.

Friendly service is extended to all passengers, with particular importance placed on treating children with the same courtesy extended to adults.

Suggested gratuity amounts are calculated on a per-person per-cruise rather than per-night basis and can be added to onboard accounts or offered in cash on the last night of the cruise. Guidelines include gratuities for your dining-room server, assistant server, head server, and stateroom host/hostess on the basis of $12 per night. Tips for room-service delivery, spa services, and the dining manager are at the passenger’s discretion. An automatic 15% gratuity is added to all bar tabs.

Castaway Club membership is automatic after completing a Disney cruise. Benefits include a complimentary gift (such as a tote bag or beach towel), communication about special offers, priority check-in, invitations to shipboard cocktail parties during subsequent cruises, and a special toll-free reservation telephone number (800/449–3380) for convenience.