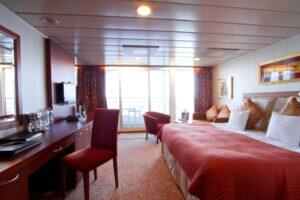 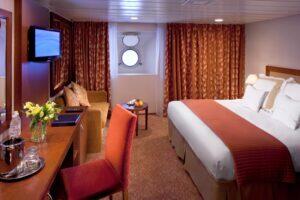 Azamara Pursuit is the line’s newest vessel, and she was originally part of Renaissance Cruises, and most recently the Fathom Adonia. The ship was extensively refurbished in dry dock before becoming a part of the Azamara fleet in August 2018. Like her sisters, Azamara Pursuit is small, carrying passengers who come for the intimate setting and camaraderie as well as the focus on the destinations. This ship offers plenty of calls on smaller ports that are less frequently visited, as well as longer stays and even overnights in many destinations that offer don’t-miss nightlife and impressive dining. Azamara Pursuit travels to the Caribbean, South America, and Europe.Read More

Azamara ships travel around the world, focusing on the destination rather than the ships themselves. The line calls it “destination immersion,” and the result is longer stays in ports, more overnight stays (with evening shore excursions in some cases), and many itineraries that focus on a single destination. Because the line’s three ships are smaller vessels, these itineraries often call on smaller, less-visited ports as well. Most sailings are longer and can be booked back-to-back in “stackable” itineraries without repeated ports. All three vessels are identical, former Renaissance Cruises’ ships.

This ship (the former R8) is the newest in the fleet. It has changed hands several times between when Renaissance folded in 2001 and when it was refurbished and rechristened by Azamara in August 2018. It was most recently the Caribbean-based Fathom Adonia with Carnival Cruises’ short-lived community service-focused line. During the refurbishments, the line removed the casino, added a variety of cabins, and spruced up the entire vessel. It certainly doesn’t feel like a decades-old ship now, though vestiges of the past —there are fewer balconies and a smaller spa than on ships being built today — remain.

In a surprise move parent company Royal Caribbean International announced the formation of an all-new, deluxe cruise line in 2007. Two vessels originally slated for service in the Celebrity Cruises fleet, which were built for now-defunct Renaissance Cruises and acquired with the purchase of the Spanish cruise line Pullmantur, were the basis for the new line, Azamara Club Cruises. Designed to offer exotic destination-driven itineraries, Azamara Club Cruises presents a more intimate onboard experience while allowing access to the less traveled ports of call experienced travelers want to visit.

When a cruise line sets a course to break the mold in an industry where the product falls into traditional categories—mainstream, premium, luxury—it’s an exciting opportunity for experienced travelers who may want more than what a traditional cruise can deliver. More interested in traveling than cruising, they may still prefer the comfort and convenience that only a cruise ship can deliver in some exotic locales. Azamara Club Cruises gives this underserved group of travelers what they want—a cruise experience that’s a bit different. Not quite luxury but more than premium, Azamara offers a deluxe cruise with concierge-style amenities for which you’d have to upgrade to a suite on other cruise lines.

In addition, since its launch Azamara Club Cruises has added a number of more inclusive amenities to passengers’ fares, with no charge for a specific brand of bottled water, specialty coffees and teas; shuttle bus service to/from port communities, where available; standard spirits, wines, and international beers throughout the ships during bar hours; and complimentary self-service laundry.

Extensive overhauls of two ships that formerly sailed for the now-defunct Renaissance Cruises have resulted in interiors that are brighter with the addition of light, neutral carpeting throughout, and splashes of bold color in the upholstery and drapes. Areas that once appeared stuffy are now welcoming, with contemporary artwork further enhancing the decor. Each vessel weighs in at 30,277 tons and carries only 694 passengers. While the size affords a high level of intimacy and makes the ships easy to navigate, there is no skimping on features normally abundant on larger ships, such as private balconies and alternative dining. Cruisers may feel that they’ve checked into an upscale boutique hotel that just happens to float.

Pros
Cons
Overnights let you dining out and catch some nightlife
“White Nights” Party is a beautiful alfresco evening
Complimentary “AzaMazing Afternoons” offer one more festive celebration
Cabins are small, most without tubs or verandahs
Ship is built to specs of a different time (small cabins, etc.)
Children are permitted, but families aren’t catered to

This older ship has significantly smaller cabins than what you might find on competitive vessels today. Spaces are comfortable, with a pale grey palette and crisp white sheets. The majority of the cabins onboard are Club Verandah Staterooms and have balconies with tables and chairs, a desk, and a couch with a coffee table. All rooms have 40”-flat-screen TVs, robes and slippers, and extensive 24-room service menus. Included with the refurbishment in 2018 was two new spa suites with sunken tubs facing windows.

Entry-level staterooms have small, if well-organized, bathrooms, with small showers with shower curtains. As you move up in categories, the bathrooms grow larger at the top-level suites. Very few suites have bathtubs, so book early if that’s an important feature for you.

The ship’s main dining room, Discoveries, and buffet restaurant, Windows Café, serve both Continental and regional cuisine. Look for a wide variety of choices at every meal. Surprise hits at Windows Café include Indian curries with naan bread. Azamara Pursuit also has a pair of specialty dining restaurants. The steakhouse, Prime C, is home to classic steakhouse greats such as chopped salads, crab cakes, massive 16-ounce ribeye steaks, herbed rack of lamb, creamed spinach, and twice-baked potatoes. The Italian restaurant, Acqualina, offers Italian favorites, such as Caprese salad, beef carpaccio, gnocchi with pesto, and mushroom risotto. There is also a complimentary grill on the pool deck, with a menu that goes way beyond burgers, and a weekly “White Night” cookout under the stars that’s a favorite of many cruisers.

When the line removed the casino during refurbishments, they replaced it with a cozy lounge called The Den. There’s also The Living Room, a great space to catch a sunset due to the floor to ceiling windows, and Mosaic Café — a coffee bar that morphs into a great spot for hors d’oeuvres and aperitifs at night.

The spa and gym onboard are both small, with a quiet little pool deck that has a private whirlpool tub and lounge chairs. The only steam rooms are in the men and women’s locker rooms. Services include facials, massages, wraps, and teeth whitening, and there is also a hair and nail salon. The gym is equipped with cardio machines and weights and offers complimentary fitness classes.